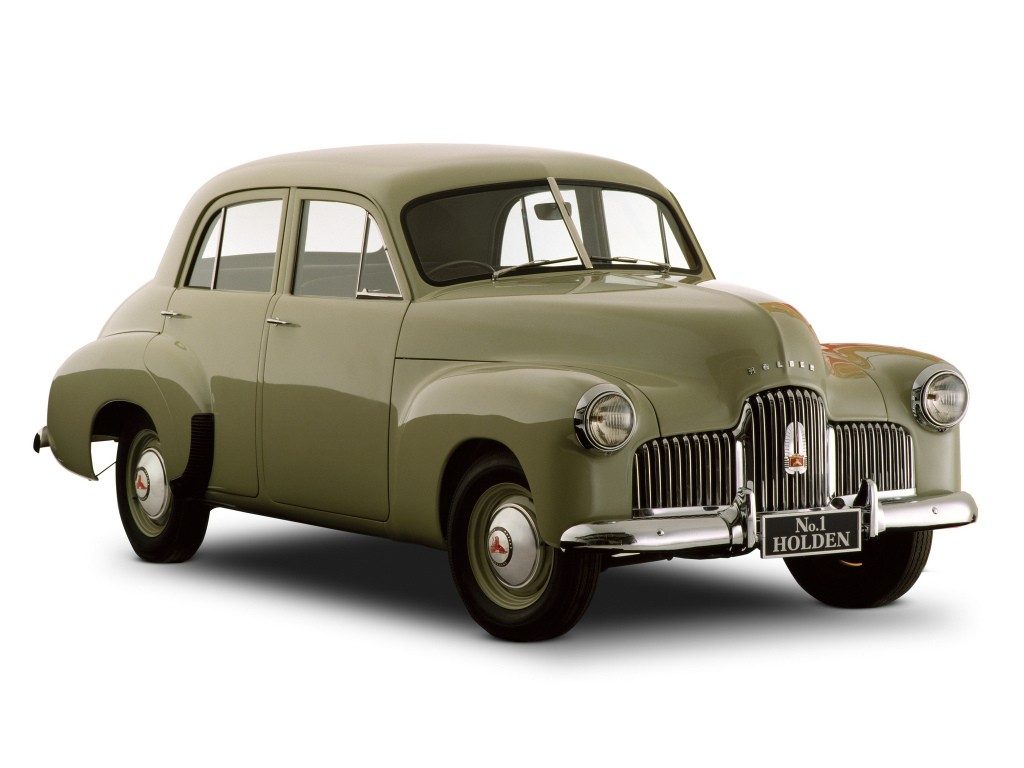 On the second of September seventy years ago, General Motors announced the eagerly awaited new Australian car would be named the “Holden”,  (the family name of GMH’s former chairman E W Holden) to honor the family who had built their Adelaide saddle and harness making business into the largest motor body manufacturing operation outside of North America.  Three months later the first production Holden 48-215 rolled off the GMH headquarters Fishermans Bend assembly to the legendary Ben Chifley’s acclamation: “She’s a Beauty”.

The outstanding success of the first Holden car is now being attributed to its brilliant engineering, design, and development for Australian conditions, market and manufacturing capability. Perhaps now this unique car will finally be recognized as one of the truly great ground breaking cars of the 20th century.

Its small lively 6 cylinder engine was more than competitive with the heavier American 6 and 8 cylinder competitors.  It carried six people in a strong lightweight and compact integral body with the fuel efficiency to match the smaller British 4 cylinder cars.

At this time we can reflect on the contribution of the core team of veteran GM engineers led by the Chief Engineer of the new Australian car program, Russ Begg.  These men had extensive experience in bringing significant new cars to market in pre war US and Germany.  Importantly, they were supported by the eager youthful enthusiasm of 30 Australian engineers who worked on the initial development of the first Holden in the USA.

100 years ago Holden Motor Body Builders was established following a 1st world war decree in late 1917 that motor body imports would cease to save shipping space.  James A Holden had started his business in 1856 and later his eldest son H J steered the company through the late nineteenth century depression difficulties to become the largest provider of leather and canvas products for the Australian army and transport in the horse drawn era.

After the WW1 H J’s sons, Edward and later William, were to drive the expansion and capability of HMBB to the point where General Motors contracted them in late 1923 to be their national supplier of motor bodies.  Holden’s new Woodville manufacturing facility was dedicated to GM requirements while the Adelaide William Street plant supplied the other body customers and built railcar and tram bodies.   By the middle twenties HMBB were building up to 1,000 bodies each week, nearly 40% the Australian markets needs and GM passed 30%.

During the dark days of the depression in 1931 the two companies merged to form GMH. H J passed away in 1926 and young William, the outstanding manufacturing manager died following a riding accident in 1929.  Edward was appointed MD following the merger and brought in some outstanding Australians managers who helped return the company to profit in 1933.

Edward was involved in the decision by GM to bring in the global experience of 35 year old Lawrence Hartnett to lead the organization in 1934. E W Holden served as the company chairman until his death in 1946.  Hartnett’s enthusiasm motivated the young organisation and GM dealers to achieve a 40% market share by the late 30s.

A national aspiration to build an all Australian car began in the mid-thirties that meant building engines, transmissions and chassis. Local content manufacturing had grown significantly during the previous decades, was recognized as economically desirable and by the late thirties had garnered government support. Hartnett quietly investigated the prospect of building an all Australian designed car and conducted extensive studies.

War intervened and all production resources were directed to that purpose.

As the tide of hostilities turned government and industry minds started to focus on post war reconstruction and employment of returning forces. A small team of GMH designers and engineers resurrected their early studies and prepared styling and engineering specifications, and manufacturing proposals.

Hartnett took his plans to GM who recognizing the Governments desire to build an all Australian car gave Hartnett the go ahead.

In early 1945 young Australian engineers had joined Russ Begg to develop and engineer what was to become the pride of the nation.

For detail references to GMH Documentation and memories refer to the Holden Retires Club website “hrc.org.au”.